In this section, we will learn how around 7 million years ago, the first primates appeared on Earth. Over time, these primates evolved and diversified, giving rise to a number of different branches on the evolutionary tree. One of these branches gave rise to the hominids, a group of primates that includes modern humans and our extinct relatives. We learn how these early humans started using Stone Tool technologies and controlling fire. By the end of section, we will understand how these technologies with development in knowledge passing to future generations helped early human society to a modern one.

85 million years ago
The Early Primates

The first primates appeared around 85 million years ago during the late Cretaceous period. They were small, arboreal mammals that lived in the forests and jungles of the Mesozoic era. They likely had grasping hands and feet, large eyes, and a keen sense of smell, which helped them to navigate through the trees.

It is thought that they evolved from a group of mammals called plesiadapiforms, which were also small, arboreal animals with some primate-like features. Over time, early primates evolved to adapt to a wide range of environments and gave rise to the diverse group of primates that we know today, including lemurs, monkeys, apes, and humans.

Hominoids, also known as the great apes, first appeared around 20 to 25 million years ago during the late Oligocene and early Miocene epochs. They are thought to have evolved from a group of primates called the cercopithecoids, which were also arboreal and had adaptations such as grasping hands and feet.

The earliest known hominoid species is Proconsul africanus, which lived around 20 to 25 million years ago in what is now Kenya and Tanzania. This species was a primitive ancestor of the great apes (gorillas, chimpanzees, orangutans, and humans).

The Great Apes are distinguished from other primates by the presence of a tail-less body and a large brain size relative to body size, which allowed them to develop complex social systems, tool use, and intelligence. They have evolved over time to adapt to different environments, including forested, savannah, and mountainous regions.

7 million years ago
The First Hominines (Bipedal Apes)
Hominids, also known as hominins, first appeared around 7 million years ago during the Miocene epoch. They belong to the superfamily Hominoidea, which also includes apes, and are characterized by certain features such as bipedalism and a larger brain size relative to body size. They are thought to have evolved from a group of primates called the australopithecines. The first known australopithecine species is Sahelanthropus tchadensis, which lived around 7 million years ago in what is now Chad, Central Africa. It is believed that hominids evolved bipedalism as an adaptation to a savannah-like environment, where it would have been beneficial to be able to walk upright on two legs to travel long distances, and to have a better view of the surroundings. Over time, early hominids evolved to adapt to a wide range of environments, and gave rise to the diverse group of hominins that we know today, including the genus Homo, which includes modern humans (Homo sapiens).
2.5 million years ago
Development of Stone Tool Technology

The Lower Palaeolithic or Early Stone age period, which lasted from around 2.5 million to 300,000 years ago, was characterized by the development of the earliest known stone tools, such as simple choppers and scrapers, and the emergence of early human species such as Homo habilis and Homo erectus.

About 2.5 million years ago
Homo Habilis

Homo habilis, also known as "handy man", is considered to be the first member of the genus Homo. It first appeared around 2.8 to 2.3 million years ago, during the early Pleistocene epoch.

Homo habilis is characterized by a number of features that distinguish it from earlier hominids, such as a larger brain size relative to body size, and the ability to make and use stone tools. The first fossils of Homo habilis were discovered in 1960s by Louis Leakey and his team in the Olduvai Gorge, Tanzania, East Africa.

The exact origins of Homo habilis are not well understood, but it is believed to have evolved from a group of early hominids called australopithecines, which had adaptations for bipedalism and a larger brain size. Homo habilis is thought to have been a transitional species between the australopithecines and the later members of the genus Homo, such as Homo erectus and Homo sapiens.

Around 1.8 million years ago
Homo Erectus

Homo erectus, also known as "upright man", is considered to be the first hominin to have consistently walked upright on two legs (bipedalism). It first appeared around 1.9 to 1.6 million years ago, during the early Pleistocene epoch.

The first fossils of Homo erectus were discovered in the 1890s by Dutch physician and paleontologist Eugène Dubois in Java, Indonesia. Fossils of this species have also been found in Africa, China, and Georgia.

Homo erectus is characterized by a number of features that distinguish it from earlier hominins, such as a larger brain size relative to body size, a more human-like skull shape, and the ability to make and use more advanced stone tools. It is also the first human ancestor to have spread out of Africa and colonized other parts of the world, such as Asia and Europe.

1-1.5 million years ago
Controlling the Fire

The use of fire by early humans is a topic of ongoing debate among scientists, but it is believed that it started around 1.5 to 1 million years ago, during the Middle Pleistocene epoch.

The earliest evidence of controlled use of fire by early humans comes from archaeological sites in Africa, such as the Wonderwerk Cave in South Africa and the Chesowanja archaeo-site in Kenya, which date back to around 1 million years ago. The evidence includes evidence of fire-cracked rocks, ash and charcoal, that suggests that early humans were using fire for cooking, lighting and as a tool.

It is believed that early humans would have used natural fires caused by lightning strikes, volcanic eruptions or wildfires to start their own fires. They would have learned to control and maintain the fire, and eventually to create fire by using friction, percussion, or other techniques.

The use of fire by early humans is considered to be a major turning point in human evolution, as it allowed early humans to cook food, which made it easier to digest, and provided a source of warmth, light and protection from predators. Additionally, the use of fire may have also played a role in the development of human society, as it likely brought early humans together and allowed them to share information, stories and cultures.

Around 300,000 years ago
Advancement in Stone Tool Technology

The Middle Palaeolithic period, which lasted from around 300,000 to 50,000 years ago, saw the further development of stone tool technology, including the creation of more complex tools such as hand axes and spears. The period is also characterized by the emergence of Homo neanderthalensis, a human species that lived in Europe and Asia for around 300,000 years before going extinct around 30,000 years ago.

Around 300,000 years ago
The Neanderthal

Neanderthals, also known as Homo neanderthalensis, first appeared around 300,000 to 400,000 years ago, during the Middle Pleistocene epoch. They are considered to be a separate human lineage or subspecies of Homo sapiens and have a number of distinct physical and behavioral characteristics.

The first fossils of Neanderthals were discovered in the 1850s in the Neander Valley, Germany, which is where the species gets its name. Since then, fossils have been found in many other parts of Europe, as well as in Asia and Africa.

Neanderthals are characterized by a number of features such as a larger brain size, a more robust and stocky build, and the ability to make and use complex tools. They were also well adapted to the cold climate of the Ice Age Europe, with features such as a wide nose, and a large nasal cavity to warm up the cold air.

The exact origin of Neanderthals is not well understood, but it is believed that they evolved from a group of early hominins such as Homo heidelbergensis and then diverged from the Homo sapiens lineage about 400,000 years ago. Neanderthals lived in Europe and Asia for around 300,000 years, and became extinct around 30,000 years ago.

Homo sapiens, also known as modern humans, first appeared around 300,000 to 200,000 years ago, during the Middle Pleistocene epoch. They are the last surviving member of the genus Homo and have a number of distinct physical and behavioral characteristics. It is believed to have evolved from a group of early hominins such as Homo erectus or Homo heidelbergensis, and then diverged from the Neanderthals about 300,000 years ago.

The exact place of origin of Homo sapiens is not well understood, but it is believed that the species first evolved in Africa and then spread to other parts of the world. The earliest known fossils of Homo sapiens have been found in eastern Africa, such as in the Omo Kibish Formation in southern Ethiopia and in the Middle Awash area in Ethiopia.

Homo sapiens is characterized by a number of features that distinguish it from earlier hominins, such as a larger brain size relative to body size, a more gracile build, and the ability to make and use complex tools and symbolic expressions. Homo sapiens also have a unique combination of genetic, cultural and cognitive adaptations that allowed them to spread across the globe and adapt to various environments.

Around 50,000 years ago
Upper Palaeolithic period
The Upper Palaeolithic period, which lasted from around 50,000 to 10,000 years ago, saw the emergence of Homo sapiens, the first anatomically modern humans. This period is characterized by the development of even more advanced stone tool technology, such as the creation of flint knives and blades, as well as the emergence of art and symbolism, such as cave painting, sculpture and rock art.
Passing on Knowledge: Cave Painting

Cave paintings, which were created by early humans during the Palaeolithic era, are believed to have been used as a means of passing down knowledge and information from one generation to the next. Some scientists believe that cave paintings were used as a form of storytelling, depicting important events, myths, and legends that were passed down orally through generations.

Cave paintings also depict hunting scenes, which may have been used to teach young hunters about the animals they would encounter, as well as hunting techniques and strategies. These paintings may also have been used to commemorate successful hunts or to record the presence of certain animals in an area.

Cave paintings also depict hand stencils, which could have been used to record the presence of individuals or groups in a certain location or to mark territory.

It's worth noting that the exact purpose and meaning of cave paintings is still debated among scientists and researchers, and different interpretations may exist. But it is agreed that cave paintings were a way for early humans to communicate and pass on knowledge to future generations.

Around 12,000 years ago
The Agriculture Revolution

During the Palaeolithic era, early humans lived as hunter-gatherers, relying on hunting, fishing, and gathering for survival. They lived in small groups and moved around frequently in search of food and resources. This way of life changed with the Agricultural revolution, about 12,000 years ago, with the beginning of the Neolithic era, which brought the emergence of settled communities, domestication of animals, and the invention of agriculture. 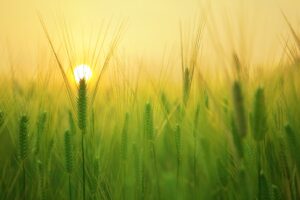